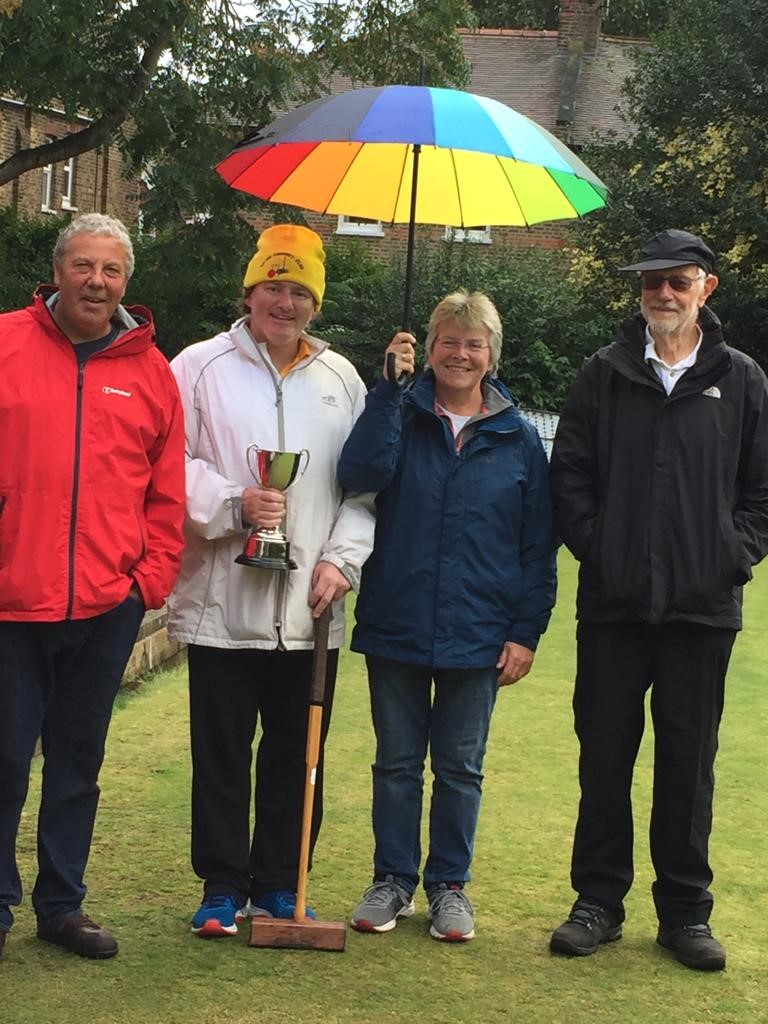 Despite the on-off weather forecast our four intrepid contestants at the top of the GC Rainbow board turned out in plenty of time for the 2pm start. A draw was made to decide who was to play whom in the semi-finals. Peter Alsbury put up a fine fight against Charlie Sale, but Charlie won his place in the final with a 7-5 victory. Meanwhile a battle ensued on Lawn 1 between Fred White-Overton and Jane Powell. Trailing for most of the game, Jane made a mid-game attack and pulled herself up to 6-6. The combat for the Golden Hoop was eventually won by Fred, to take his place in the final.

Despite the very soggy air, Charlie and Fred – fortified by a cup of tea – strode out onto the lawns supported by an appreciative, if slightly damp, audience of nearly a third of the membership! When the rain became too much a short break was agreed. The game was neck and neck to 5-5, with Fred using an Extra Turn to convert it to 6-5 and an advantage, to take the match 7-5. A very close thing, and well played by both gentlemen in less than ideal conditions. Fred was presented with the recently acquired (from an anonymous donor) Rainbow Cup, by last year’s champion Ron Carter. Fred as runner-up last year passed on the runner-up’s Rainbow umbrella to Charlie. Everyone retired to the white room for a very fine spread of tea, cakes and savouries, kindly donated by many of the members. Special thanks to Annie for setting it all out, and to Harry and Naomi who did most of the washing-up!