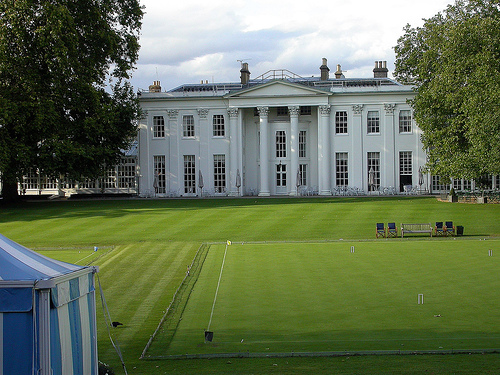 Ealing set off powerfully in all three Matches in the morning session, with Bridget and Jane quickly 4-2 up in the Doubles against the very experienced Lead pair for Hurlingham, Hugh Carlisle and Frank O’Neill. Charlie Sale rattled through his first game 7-1 against a struggling Michael Rowan, and Tony Elliott matched Martin Read initially before falling away to a 4-7 loss in Game. Game Two for Tony was 7-4 in his favour, and he was playing well, whilst Charlie on the same Lawn completed his Match with a comprehensive 7-2 win over Michael: Ealing One Hurlingham Nil, though Hugh had taken control of the Doubles winning the first game just 7-6 and giving a tactical masterclass in Game 2 for a 7-4 win, taking the Doubles Match despite some excellent clearances and hoops from Bridget and Jane. One Match each, then Two One down at Lunch as Martin played an error-free 7-2 winning game against Tony.
So Ealing now had to win 3 out of 4 of the afternoon Singles Matches, kicking off with the two top seeds, Hugh versus Bridget: a very determined Bridget played Clearance after Clearance against the precise positioning of Hugh to edge the First game 7-6 on a nervy Golden Hoop: Hugh ran away with Game Two 7-4, and looked to be back in control of the Match. On the same Lawn, Jane found her form against Frank O’Neill, winning two straight games 7-4: Ealing Two Hurlingham Two.
On the other Lawn Ealing were unexpectedly struggling, with both Tony and Charlie losing their first games 4-7 by missing too many opportunities to score. Come on Lads, get it together, which was exactly what Bridget was doing, blowing away Hugh 7-2 in the 3rd.game by changing tactics, and hitting some great Hoops. Ealing in front 3 to 2, but NOT for long as Charlie continued to struggle against Martin, going down 5-7 in the second game: 3-3 and all eyes on the last match, which very slowly unfolded in front of us.
Tony ground out a 7-1 second game win with Michael again struggling with his eyesight: he’d had a cataract Op. only 8 days ago, and couldn’t judge distances well. So he changed tactics, playing balls close to the Hoops, and forcing Tony into clearances repeatedly until he missed ! It worked, Tony took only 1 from the first five hoops, and had lost his accuracy. Determinedly Tony fought his way back to 5 all, with both players making seemingly crucial errors on critical shots: the pressure was definitely ON for both of them. 6-5 Michael after 10 minutes or more at Hoop 11, then 6 all after even longer on 12: Michael first to 13, but plays it short, advantage Tony with two on the Hoop, but he Jaws the shot, and is cleared by the back Ball, advantage Michael, who is cleared himself by Tony, advantage no-one with not one ball able to play a hoop running shot, and so it went on,…. and on,… till a vital 10-yard missed clearance by Tony leaves Michael the winning shot from all of 4 inches.
So Nearly, Ealing.
You can see some of the highlights in Annie’s excellent video below:
Hurlingham Highlights
14/07/2020
Ealing pipped at the peg by St Albans