Ealing narrowly succumbed to reigning champions St Alban’s in a titanic encounter in the first round of the AC Longman Cup at Lammas Park.

The visitors exercised their prerogative under coronavirus restrictions to field a team of three. In the morning doubles Carole McLoughlin and Simon Tuke never really got going against Stephen Mills and Derek Lambert, not helped by facing a fence of six bisques, the last of which was used to peg out.

Roger Mayhew fared better in the battle of the Rogers, against Bowman of that ilk. When time was called Roger B needed to make five hoops and a peel to draw level. He managed an excellent five-hoop break, but appeared to realise the need for the peel rather late in the day. So Roger M won by the time-honoured score of Plus One On Time.

In the afternoon Simon laboured to get going against Stephen, mistakes and narrowly missed roquets pinning him back. However, eventually he hit the last shot when Stephen was for peg and peg, and picked up an excellent break from hoop 4, including a straight Rover peel, to win +2.

Roger M was chipping away at the nine bisques he had to give Derek, extracting them like pulling teeth. He eventually managed to peg Derek out at the second attempt (though your correspondent was pretty sure the first attempt had hit the peg!). There then followed a fascinating cat and mouse struggle, with Derek for the peg and Roger having just made Penult with his back ball. Roger appeared to have the edge, but unfortunately time was called at that moment, leaving Roger needing to execute a long speculative roll to Rover, which proved unsuccessful. Minus Two On Time.

With the scores now level, it all came down to Carole’s game, in which she was struggling to make an impact. Having been stuck on 1 and 1 for a long time she eventually got a ball round, but the clock defeated her, handing the victory to St Alban’s by a margin of 3-2.

It was an excellent match played in a very good spirit. Ealing did extremely well to come so close, given the significant number of bisques we were giving away in every game. It was also great to be able to offer traditional Ealing hospitality once again, in the form of a tasty lunch topped off by a superb Peach Crumble created by Carole.

The fine weather was an unexpected bonus, especially given the damp and gloomy start to the morning, and the forecast of rain.

Now it’s on to the next fixture in our League calendar. 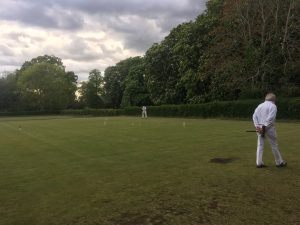 Roger can’t bear to watch as his opponent gets
one more shot. 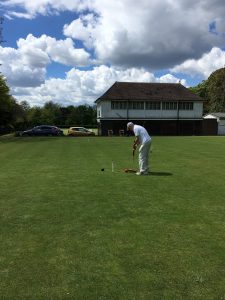 The club looking great in the sunshine.

Carole can only sit and watch as her opponent continues his progress.