Ealing ‘B’ Level a “flantastic” success

With a strong field of 12, all of whom entered with Handicaps of 3 or 4, we got off to a delayed start at Lammas Park’s dampish lawns after heavy overnight rain, and the threat of thunderstorms. Happily, the overcast conditions were cooler and less humid than the “sweatbox” endured by the “C” level competitors the day before.

Round One games in both Blocks immediately produced defeats for the top-ranked player in each, Ian Rees bouncing past Julie Tremble 7-3, whilst the 2020 Winner, Tony Elliott lost out 5-7 to Julie’s clubmate and chauffeur, John Gosden. The 2020 event had been John’s first ever “B” level as a 5 handicapper, and despite Covid-19 limiting opportunities since then, he entered the 2021 event as a fast improving 3. Indeed, he ploughed inexorably on, winning all 5 of his Block games: and far from trembling, Julie won her next 4 on the trot too: must have been John’s driving, and maybe arriving too late for a full 10 minutes “warm-up”. Not to be out done, Tony chased his conqueror with 4 straight wins at the top of Block B, out pacing Des Taylor who was desperately unlucky to lose 6-7 against both Johns: Gosden and Richardson.

Back in Block “A” an East Anglian bandit was stacking up wins, including an impressive 7-4 over the in-form Ian Rees, leading up to a last round showdown between the unbeaten Simon Draper and Julie needing the win to equal their 4: 5-7 to Julie it was, and with equal wins and net hoops, the vital win to push Simon out of the Semi-Finals, where she faced her unbeaten driver. John crumbled to a 2-7 defeat, whilst Ian fell 5-7 to Tony Elliott who just kept running hoops! As he did in a 19 point Final too, running away 10-5 against Julie in precisely the final pairing the rankings predicted. Both he and Simon Draper rose from 4 to 3 Handicap, whilst John Gosden securing 3rd. place 7-3 against Ian Rees is now off to “A” level as a 2, having lost one game all day.

Robert Cook picked up the Prosecco by winning the Plate final 7-5 over a deflated Draper, while all of us enjoyed Isobel’s “ Russian Raspberry Flan “ as the best dessert. 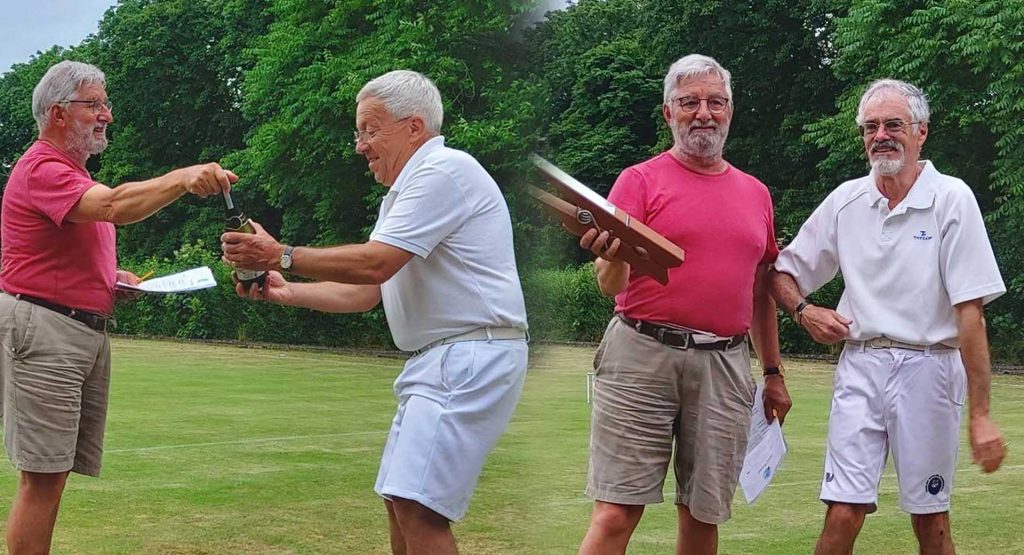